The city of running, the fashionable city of the two great athletic distances marathon and half marathon of the world panorama, met with an unexpected enemy in one of its great days. The wind, with gusts of up to 70 kilometers per hour was a nuisance, in any case, insufficient to enjoy the World Half Marathon. Neither the rain, intermittent, spoiled the party. Let them tell the Ethiopian Netsanet Gudeta Kebede. Who proclaimed herself universal champion of the 21 kilometers with an added world record. He covered the distance, in a tour praised by the International Athletics Federation (IAAF) from the same day he saw it drawn, in 1 hour, 6 minutes and 11 seconds. 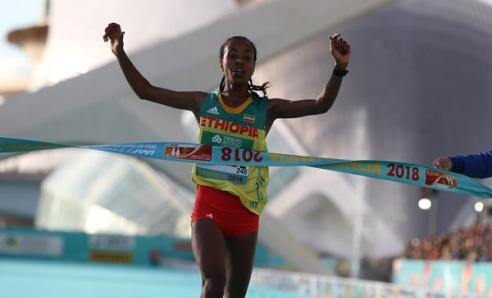 It is the best brand in history in a half marathon exclusively for women. Taking into account that men and women ran separately, with half an hour interval. It is another milestone in women’s athletics signed in Valencia, the second in 5 months. Last October Kenya beat the world record in the Half Marathon of Valencia with a time of 1: 04.51. In a mixed race, with male “hares” that set the pace. It was not the case yesterday. He crossed the mythical arrival in the lake of the City of Arts and Sciences in second place. As far as selections are concerned, Ethiopia was the gold, followed by Kenya and Bahrain, with the great absence of Japan, present on the world podium since 2005. The Valencian Marta Esteban (60th), excited by the atmosphere of her city, was the second national, with 1:14:47.

In men, the triumph was for Geoffrey his third consecutive world championship. After winning in Copenhagen 2014 and Cardiff 2016 Kamworor returned to hang the gold in the Spanish edition with a time of 1:00:02. Behind the great dominator of distance, the Bahrain athlete Abraham Naibei Cheroben crossed second (1:00:22) and the Eritrean Aron Kifle, third (1:00:31). By teams, the men’s podium was the same as the women’s Ethiopia, Kenya and Bahrain.  Behind all of them, and them, came the more than 14,000 popular runners. Among them, Carles Castillejo, recalled on Friday by an error of the Spanish federation, which had summoned 6 athletes instead of the 5 allowed.

Castillero ran like a popular one, without complexes, to enjoy the city. “I was selected, but the federation was wrong to enroll six athletes and by technical decision, which has been seen as wrong, they took me away. At the last minute, the international federation has allowed me to compete. At 20.15, the closing time of the finish line, the last popular ones were still arriving, encouraged by the excellent atmosphere they found in the streets of Valencia. The center of the city, in the second part of the race, was the closest thing to an urban athletics stadium.